The SELA Drainage project planned for Louisiana Avenue began in the summer of 2015 and is expected to last until 2018. 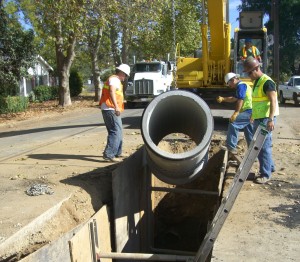 This project is a major one and consists of constructing canals under the neutral grounds (medians)  of Louisiana, Napoleon, and Jefferson Avenues in order to reduce flooding in New Orleans and surrounding parishes. New pumping stations are part of this overall project, though not in our area. The program was authorized in 1996 by Congress and administered under a project-cooperation agreement between the Sewerage and Water Board of New Orleans and the U.S. Army Corps of Engineers.

Napoleon Avenue work has been underway for several years  as has Jefferson Avenue.   All phases will take a few years each and will overlap in their timing, an overall time frame of 4 years.   Thus, detours and road closures will be the name of the game throughout uptown from Claiborne to Constance.  The trees and tree canopy in the project area on Louisiana Avenue will be affected.  The GDA hashes started conversations with contractors and  representatives from Parkways and SELA  to mitigate the impact on the trees and to work on the subsequent landscaping plans for the neutral grounds in our area.

Residents of all communities must stake a claim of ownership and responsibility for their surroundings in order for a city to work and prosper. When neighbors join forces on matters of shared importance, the neighborhood, as a whole becomes a better place to live, work and visit.
Join
The Association
Designed By: